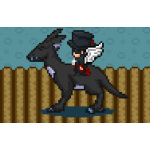 I'm STEELFROST, rather known as Emil... at least at work since my REAL name is paired up with at least two others... Life is better when it's less confusing, which is why I'm editing Life Forge's wiki, because let's face it... what else am I gonna do? XD

I'm also known as the Walking Glass Cannon (not really...) because being a pure int Wizard sucks when you have no mount. Can't say the damage is worth complaining about though.

Originally found this game through someone in a discord that was part of a community I was once close with, called Fantasy Online, and since then, let's just say Life Forge is my Fantasy Online 2.0 high, because the two games are so similar, yet different in their own right, minus the fact that Fantasy Online has been shutdown since Jan. 2013, sadly because those were some great times.

Also have a really bad irk for people using the words "your" and variations of "I" that are used to describe themselves or the readers on the wiki... Stahp, please >.> 100 edits is too much work D:

Slowly but surely raising my skill levels. The sheer amount of work required in the new level caps is a bit demanding. Who knows, I might max out one day. :P (Services available, I guess. But you're on your own for mat collecting) [Last updated; March 7, 2018]

This is out of date. I'll get it updated when I feel like it. I've collected a lot more since then.

Miscellanous: Currently working towards a college education and saving money up to donate for RPG Limit Break, a speedrunning charity marathon that occurs around mid-May to raise money for NAMI - The National Alliance on Mental Illness.

Life Forge: Hoping to be a moderator/musician for Life Forge, as well as a really strong solo player whilst helping out the community, as well as help with finding bugs and removing them.

Marriage: Hell yeah. Might happen before it's even in Life Forge :P

Retrieved from "https://lifeforge.fandom.com/wiki/User:STEELFROST?oldid=8667"
Community content is available under CC-BY-SA unless otherwise noted.